From a mild and creamy to a strong spicy and salty, Greek cheese needs to be added to your cheese repertoire!

The French might be famous for brie and blues, but the Greeks are also excellent cheese makers, in particular, Saganaki.

The significance of Greek cheese is grossly underestimated. It pre dates all other European cheeses made from cows’ milk, and the French name ‘Fromage’ and Italian ‘Formaggio’ stems from the Greek word ‘formoi’, a reference to baskets used to drain curd during cheesemaking. What’s more, the earliest written records of how to make Greek cheese date back to the ancient Greeks who very wisely regarded it as ‘food of the gods’, as well as providing essential nutrition for mere mortals. Milk and yoghurt have always formed an important staple of the Greek diet and there are literally hundreds of different types of Greek cheese made on the mainland and islands, many of which have never been documented. The majority are fresh salted cheeses, sometimes matured for a few months under olive oil or wine, are unlike the cheeses of Northern Europe, for they are frequently used for cooking both savoury dishes such as Saganaki cheese or being crumbled into delicious salads or even playing starring roles in sweet dishes. Anyone who has been lucky enough to enjoy the generous hospitality of Greece for just a few days will understand why the locals eat more cheese per head of population than any nation on earth.

If you’re not familiar with Greece’s cheese bounty and find the names kind of tricky, don’t be deterred! 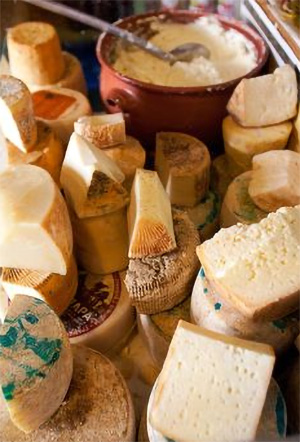 From the mainland to the beautiful Greek islands, Greece is famous for a few select Greek cheeses that are exported all around the world, but in actual fact Greece, just like other cheese making nations, has a very large variety of cheeses; from their most popular Feta, that everyone has heard of and probably even tasted in dishes such as a traditional Greek Salad, to their lesser known such as Myzithra that’s made from leftover whey and then added sheep milk and is similar to Ricotta.

Other Greek cheese include but certainly not limited to Anevato, Galotyri, Formaela, Haloumi, Kasseri, Kopanisti Mykonou, Metsovone and Xynotyri… the list is almost endless, so I’d suggest heading to your local Greek Deli and giving them a go!

What cheese is best to make Saganaki?

Cheese Saganaki, or Greek fried cheese is a traditional Greek food, and as you can imagine with such a large selection of Greek Cheese to choose from, can be made using many types of cheese, despite many people just assuming that saganaki is indeed saganaki cheese!! 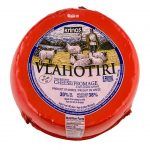 Confused!?  In fact, saganaki can be made using haloumi, graviera, kefalograviera, kasseri, kefalotyri, manouri or as a worst-case Pecorino Sardo; but our favourite is Vlahotiri as it’s a hard, sheep’s milk cheese with a tangy flavour, and in my opinion the best one to use.  Check out my recipe here.